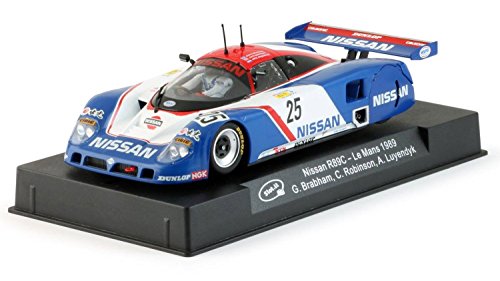 For the 1989 season, rather than relying again on chassis built by March, Nissan had developed the R89C SICA28D in conjunction with Lola. The car featured a Kevlar and carbon-fiber based monocoque chassis fitted with Nissan’s new twin-turbo VRH35 3.5L V8 DOHC engine which was mounted in a stressed installation for better chassis rigidity, delivering up to 950bhp. Despite Nissan’s efforts, the 1989 world sports car Championship season was rather unsuccessful for Nissan, as their cars lacked reliability and speed. The beautiful R89C was only able to score points in three races and finished the season in fifth place in the Championship for teams. At the 24 hours of Le Mans, three r89cs were entered into the race, none of which reached the finish line. Car number 23 was driven bye m. Has em I, K. Hoshino, T. Suzuki. Once again, Nissan had chosen ’23’ for one of its official cars. The reason is that number 23 can be read as “Ni San” in Japanese, and this is why Nissan frequently enters a car numbered ’23’ into motor sport events. The car numbered 25 was driven by a. Luyendyk, g. Brabham, C. Robinson.
High detail racing slot car compatible with all 1:32 tracks
V12/3 21,500 rpm Type s inline motor provides superb Torque, braking and very easy to drive
9 teeth Pinion and 28 teeth inline gear
Front Rims: 15.8 x 8.2 mm sipt1159c1
Rear Rims: 16.5 x 8.2 mm sipt1167c1