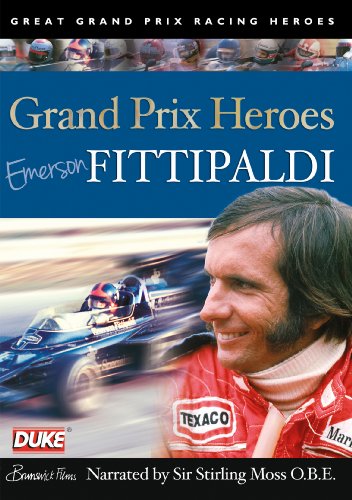 During a long and illustrious career Emerson Fittipaldi was twice crowned Formula One World Champion. The statistics are impressive, but it was the way in which he overcame setbacks and fierce rivals in faster cars that marked him out as a Grand Prix Hero. This fascinating programme examines the Brazilian legend’s road to becoming double World Champion, with breathtaking archive footage, interviews with ‘Emo’ and a rare chance to listen in on team talks and race strategy at key moments. From the moment he burst onto the Grand Prix scene with Lotus, including his 1970 British Grand Prix debut, to the tension-packed final race of the 1974 season where Emerson snatched the title, this DVD, with narration by Sir Stirling Moss, is filled with action-packed racing film and Fittipaldi’s own thoughts on the cars, rivals and races ? including revealing the ‘most difficult’ Grand Prix of his career. The tragic death of Jochen Rindt promoted Fittipaldi to Lotus team leader for 1971 and it proved a tough season, although we witness moments of genius, like his drive back from 17th to 3rd at the French Grand Prix. In 1972 he became the youngest World Champion ever ? a record he held for almost 30 years ? and we are treated to his calm, controlled driving style at classic circuits like Jarama, Brands Hatch, Monza and the ?sterreichring. The drama continued in 1973, and we see his title defence start with an unforgettable home victory at the very first Brazilian Grand Prix. It ultimately proved a season to forget, nowhere more so than at Zandvoort, where a practice crash left him in agony ? the pre-qualifying warning about painkillers having the same affect as ‘one whiskey’ reminds us what a different world Grand Prix Racing was in the 1970s! The programme concludes with dramatic racing and revealing interviews from throughout 1974, a definitive year in Emo’s career. He switched to McLaren and despite not having the fastest car and racing wheel-to-wheel with the charging Niki Lauda for most of the season, his thoughtful and mature approach to winning a championship brought him the title at the very last round. With four races to run, Fittipaldi was lying fourth in the championship standings ? but his never-say-die commitment ensured he was there at the bitter end, and guaranteed his place as a Grand Prix Hero.