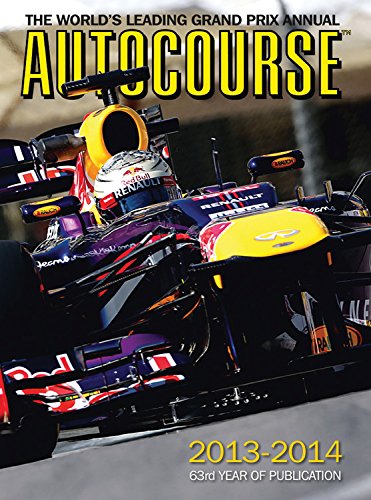 Whilst rivals come and go, The World’s Leading Grand Prix Annual reaches its 63rd year of publication as the indisputable leader in its field. The 19-race Formula 1 World championship season is covered with its usual meticulous attention to detail. This year, the much-respected Tony Dodgins takes over the editor’s role, supported by the award-winning author Maurice Hamilton. The vastly experienced pair, both long-time paddock insiders, bring you all the drama and intrigue that is Formula 1 in their reportage. Supporting their exhaustive race reports are the traditionally detailed result spreads that include specially prepared and easy to follow lap charts. Red Bull and Sebastian Vettel’s charge towards a fourth consecutive title against his perennial challenger Fernando Alonso, has been enlivened by the arrival of Mercedes-Benz as title contenders with the newly-arrived Lewis Hamilton and Nico Rosberg both claiming race victories during the 2013 season. Adding Ferrari-bound Kimi Räikkönen to this heady mix merely spices up an already fascinating championship year that ebbed and flowed across a punishing 9-month race calendar.Mark Hughes once more analyses the successes, frustrations and failures of each of the eleven teams in his Team-By-Team review, which includes team personnel and technical specifications of the F1 cars showcased in the beautiful illustrations by Adrian Dean. Special features for the 2013 edition include the marking of two special milestones, as Williams reached 600 race starts, and McLaren celebrated their 50th Anniversary as a racing team from their humble beginnings back in 1963. The sport’s other leading categories are also given lavish coverage in this comprehensive review. The single-seat ladder from Formula 3 up to GP2 showcases the rising talent pool, all aiming to make their way into Formula 1. Meanwhile Audi continued their domination of Le Mans in Sports Car Racing, whilst Touring Cars, in all their respective categories, continued to provide door-to door banging combat. Veteran scribe Gordon Kirby continues to give his no-holds barred assessment of the racing year in the United States, as NASCAR continues to dominate, despite welcome signs of a revival of Indy Car racing, highlighted by an emotional victory in the Indianapolis 500 by the enormously popular Brazilian veteran Tony Kanaan. AUTOCOURSE traditionally wraps up the year with the most complete results record supplied anywhere in a single volume. This lavish yearbook continues to be essential reading for all fans of global motorsport.