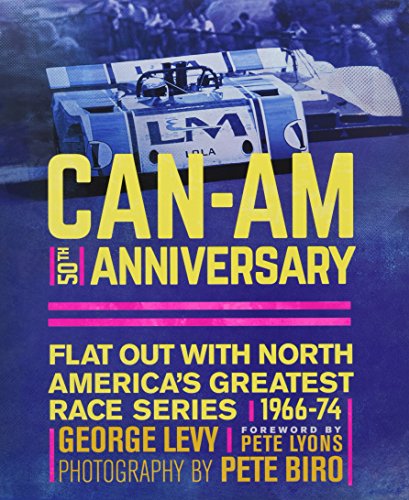 Feel the speed in this dazzlingly illustrated book on the over the top, no limits road racing series that ran between 1966 and 1974 with Can-Am 50th Anniversaryâ??.

The first rule of Can-Am: There are no rules. Or at least damn few rules. The bodywork had to enclose the wheels and there had to be something that loosely resembled a passenger seat–if your passenger was a badly misshapen human or perhaps a lab monkey. Otherwise, set your racing mind free. No limits to engine options or output, no restrictions on aerodynamic aids or body shape. It was as close to unrestricted road racing as racing had ever gotten or would ever get again. And it was fantastic.

From its introduction in 1966 to the end of its classic period in 1974, North America’s Can-Am series was the most exciting, technologically advanced, and star-studded racing series of the day. Its essentially rules-free formula attracted everyone from crazed backyard engineers to specialists like McLaren, Chaparral, Shadow, and Lola to manufacturers like Ford, Ferrari, Chevrolet, and Porsche. Top drivers including Mario Andretti, Jackie Stewart, Parnelli Jones, and Bruce McLaren competed on tracks across the US and Canada.

Can-Am 50th Anniversary offers a heavily illustrated look back at what is arguably the greatest race series ever to grace the roadracing circuits of North America. Photographer Pete Biro was Goodyear Tire’s official photographer and followed the series throughout the entire run from 1966-’74. The vast majority of the book’s images are unpublished or long out of circulation. Biro brings his unique perspective and his close relationship with the drivers, team owners, and constructors to bear on the captions while former AutoWeek editor George Levy provides an exciting text reflecting the thrill of Can-Am racing.