Product prices and availability are accurate as of the date/time indicated and are subject to change. Any price and availability information displayed on [relevant Amazon Site(s), as applicable] at the time of purchase will apply to the purchase of this product.

Spritz the Bowl Before-You-Go and No One Else Will Ever Know!
The ORIGINAL Before-You-Go Toilet Spray that stops bathroom odors before they begin – seriously!
Scientifically-tested formula made of essential oils and other natural compounds; NO harsh chemicals – ALL stink-fightin good stuff!

Some say the secret to a happy relationship is separate bathrooms, but those people have never tried Poo~Pourri, the classy, sassy, ultra effective way to leave the bathroom smelling better than you found it. Our award winning before-you-go toilet sprays come in several different sizes and scents. Go ahead…join thousands of happy customers who’ve tried Poo~Pourri for fun and keep using it because it really works! When you spray Poo~Pourri into the bowl before-you-go, our proprietary formula creates a protective barrier on the water’s surface. This barrier is designed to trap unpleasant bathroom odors beneath the surface and keep them out of the air. All you’ll smell is a refreshing bouquet of essential oils! With a bottle of Poo~Pourri in your handbag, what you do in the bathroom is nobody’s business but yours! Poo~Pourri’s aromatherapy magic replaces embarrassment with confidence in any bathroom situation. There’ll be no aerosol cover-up for you! You (and everyone around you) can breathe easy with Poo~Pourri. Poo~Pourri does more than just improve air quality – it’s environmentally friendly. Our secret blends rely on essential oils to eliminate bathroom odors, making it safe for the planet and your septic systems. 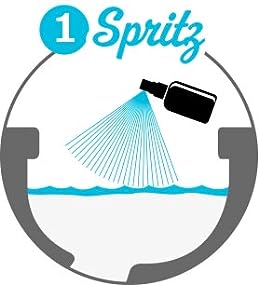 Step 1.
Spritz 4-6 sprays into the toilet bowl
on the water’s surface. 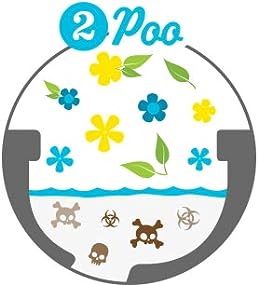 Step 2.
The secret formula of essential oils creates a
stink-fightin’ barrier—trapping odors under the surface!

Q: Toilets have feelings too, you know. Before I go carelessly spritzing, I want to make sure Poo-Pourri is okay for my treasured toilet and precious plumbing system. Is it safe?

A: Don’t you worry, sweetie poo—your beloved loo is safe with us. Poo-Pourri is made of essential oils and other natural compounds and is no worse for your waste water system than natural shampoos and conditioners. Think of all the awful bleach and harsh chemicals other folks flush down their precious potties, yuck! And Poo-Pourri will not leave a residue in the bowl. In fact, Poo-Pourri contains many of the same elements found in natural household cleaners. Your toilet may even thank you with a “flush yeah!”

Q: A trustworthy friend swore to me that Poo-Pourri is made of 4 parts Atlantis salt water, 2 parts Bermuda Triangle air, and 1 part unicorn pee. Is that true, or do I need a new friend?

A: Do you smell that? It’s your friend’s pants on fire. Though its powers may seem magical, Poo-Pourri is the real, stink-fightin’ deal. It’s made of essential oils and other natural compounds.
NO Harsh Chemicals
NO Parabens
NO Phthalates
NO Aerosol
ALL Stink-Fightin’ Good Stuff

Q: I’m a feast-eatin’ fella and I actually enjoy my own scent. So get up off me, Poo-Pourri!

A: Well, maybe your significant other or coworkers don’t. Don’t be selfish, mister. Think, before you stink. I will leave you with this quote from an ancient philosopher whose name we cannot spell nor pronounce: “You shouldn’t punish others for your own choices.”

The Story of Poo-Pourri

Suzy Batiz was sick of using after-you-go air fresheners that just didn’t do the job. In 2007, Suzy’s brother-in-law had an impossible thought—what if you could stop bathroom odor before it began? For 9 months, Suzy used her background in essential oils to turn this “a-ha!” moment into a revolutionary before-you-go toilet spray that ACTUALLY stops bathroom odor! The revolutionary product—made of essential oils and other natural compounds—works by creating a film on the water’s surface that traps foul odors beneath the protective barrier. Stinkin’ genius!

Spritz the Bowl Before-You-Go and No One Else Will Ever Know!
The ORIGINAL Before-You-Go Toilet Spray that stops bathroom odors before they begin – seriously!
Scientifically-tested formula made of essential oils and other natural compounds; NO harsh chemicals – ALL stink-fightin good stuff!
Made in the good ole USA
Up to 400 uses in the 8-ounce bottle

OK – so I know this has nothing to do with slot cars… but I saw the video and it cracked me up. – Paul K @ OWH